Join the Declaration on the Achievement of Equal Rights for LGBTI Persons in Georgia!

On May 3, 2017, the Heinrich Boell Foundation, in cooperation with the Women's Initiatives Supporting Group & the Human Rights Education and Monitoring Center held public discussions "Homophobic Politics or Political Homophobia".

On December 2, 2016, the Heinrich Boell Foundation South Caucasus Regional Office, together with its partners, the NGO Public Information and Need of Knowledge (PINK) and Society Without Violence (SWV) organized a presentation of a comprehensive LGBTI rights strategy document, titled “Realising the Human Rights of LGBTI People in Armenia”.

Baltic Pride week, whose principal slogan was "We Are People, Not Propaganda!", lasted from June 13 to 23 with the Pride March taking place on June 18 and a number of associated events conducted throughout principally organized by the Lithuanian National LGBT* Rights Organization (LGL). 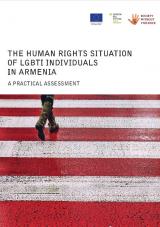 The Human Rights Situation of LGBTI Individuals in Armenia. A Practical Assessment

This study report "The Human Rights Situation of LGBTI Individuals in Armenia. A Practical Assessment" was prepared by Society Without Violence NGO within the frames of the EU-funded project “Solidarity Network for LGBTI in Armenia and Georgia” implemented by the South Caucasus Regional Office of the Heinrich Boell Foundation.

In Armenia, everyone is proud of Sergei Parajanov. He is characterized among the most original film directors of the 20th century and has as a result been recognized by colleagues in the same league as French director Jean-Luc Godard. The fact that Parajanov, who died in 1990, spent five years in prison during the Soviet era because he supposedly propagated homosexuality is mostly kept quiet, however. When people refer to this, it is immediately assumed that they do so in order to denigrate Parajanov.

By Nino Lejava and Jelena Nikolic

LGBT Rights in the South Caucasus

Wars, state failure, social and economic problems – for more than one decade after the fall of the Soviet Union, the three states of the South Caucasus, Armenia, Georgia and Azerbaijan were faced with existential challenges. With the consolidation of state structures, the at least transitional freezing of territorial conflicts, and the strengthening of ties with Western Europe, attention to the rights of sexual minorities also increased.