From Revolution to war: Domestic developments in Armenia

The corona virus crisis and the ineffective governance substantially undermined public confidence in the ruling party and its political weight.
By Gor Madoyan

Azerbaijan update: From COVID-19 to the New War in Nagorno-Karabakh

Aliyev’s popularity reached its peak during the war; the oppositional leaders stopped their criticism, while Aliyev’s actions were perceived as a just and victorious war. The active support of Turkey during the conflict inevitably led to the re-articulation and dynamic perception of Turkey as the “big brother”.
By Bahruz Samadov

"Stop the war in the South Caucasus"

Women on the Roadside of the War

This article tells about the stories of women who moved to Armenia in the third Artsakh war and whose husbands stayed in the battlefield in Artsakh.
By Gayane Ghazaryan

Nagorno-Karabakh Conflict: Russia’s “Meddling” not a Factor of Stability

The case of the frozen conflict of Nagorno-Karabakh unlike other frozen conflicts of the Former Soviet Union is in the backstage of the regional and broader attention. While the recent developments with three other countries of European Union Eastern Partnership – Georgia, Ukraine, Moldova – signing the Association Agreement with the EU  give it  now a formal justification - there are a few more substantial reasons for that, the  main of which is its complexity.
By Leila Alieva 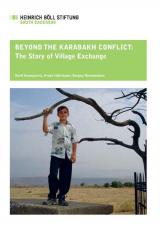 Beyond the Karabakh Conflict: The Story of Village Exchange

In the second half of the 1980s, with the beginning of the Armenian-Azer­baijani military escalation in Nagorno-Karabakh, Azerbaijani residents of Kyzyl-Shafag, a village in northern Armenia, and Armenian residents of Kerkenj, a village in central Azerbaijan, met through their own initiative to negotiate a peaceful exchange of their villages.

(Nagorno-) Karabakh – The Danger of Getting Used to a Conflict

From the outset, Germany’s chairmanship of the OSCE, in 2016, promised to be fraught with sizable challenges. One of these challenges came from the recent developments in the South Caucasus, which demonstrated with renewed force that national boundaries in the post-Soviet space, and thus the security situation, are still far from stable.
By Nino Lejava

Living on the Edge: Fragile Stability in Nagorno-Karabakh

Though in early 2016 policy-makers and policy analysts on Nagorno-Karabakh conflict warned of “un-freezing of the conflict”, there seemed to be a consensus among the majority of observers that a major escalation of the conflict was unlikely. Then, in April 2016, came the “four day war”. Several months later, in summer 2016, some experts warned of a possible repetition of April events. Indeed, since then numerous violent incidents in the zone of conflict took place, however, so far the predictions about a possible repetition of April events have failed to materialize.
By Mikael Zolian