Rebecca Harms, member of the European Parliament, Group of the Greens/European Free Alliance and co-chair of EURONEST Parliamentary Assembly, visited Georgia on July 12-16, 2017. Ms. Harms participated in the conference “European Way of Georgia” which was held in Batumi on July 13-14, 2017. Ms. Harms was a speaker at a panel discussion on Energy Security in Europe. During the conference, she met with the Speaker of the Parliament, representatives of the ruling party and leaders of the opposition. Moreover, meeting with the leading Georgian NGOs was organized in Batumi which was focused on human rights issues (especially on Mustafa Emre Çabuk and Afghan Mukhtarli cases), democratic politics and the EU integration issues in Georgia.

After the round-table discussion, Ms. Harms had informal talk with journalists and media specialists from the leading newspapers/online media regarding media environment and the existing threats to media freedom. Journalists informed Ms. Harms on Rustavi 2 case and talked about current challenges of media pluralism. Ms. Harms emphasized the importance of raising these issues at the European Parliament especially before the upcoming Eastern Partnership Summit in Brussels. She also outlined the possibility to hold a conference/panel discussion on democratic politics, media environment and human rights within the framework of cooperation between Heinrich Boell Foundation and other civil society partners.  After the informal talk, Ms. Harms gave interviews to Netgazeti and Radio Liberty regarding her visit in Georgia. 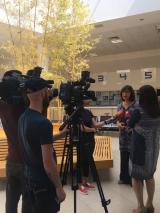 On July 16, she met with the lawyer and wife of Afghan Mukhtarli - an Azerbaijani journalist who was abducted in Georgia and was taken to prison in Azerbaijan. Ms. Harms emphasized the importance of conducting independent investigation and granting the status of victim to Afghan Mukhatrli and his wife. Later on, Ms. Harms visited Mustafa Emre Çabuk, Turkish citizen and the head of the Demirel Private College, in prison. She commented with journalists regarding this case and stated that the Georgian authorities should not extradite him to Turkey because there are serious questions regarding transparent investigation or procedures that are based on the rule of law in Turkey. Ms. Harms also met with Mustafa Emre Çabuk’s family members and pointed out that they should be given asylum in Georgia or EU countries.

Ms. Harms’ visit in Georgia was covered by all major TV, newspaper and online media. Civil society organizations and family members of Afghan Mukhtarli and Mustafa Emre Çabuk have emphasized the significance of her visit and regarded it as an expression of the EU’s support.