Environmental Protection - The Issue Only Citizens Worry About

There is a general agreement among citizens of Georgia that the protection of the environment is a matter of crucial importance. While the environmental sustainability is essential for 98% of the population, the environment-oriented policy has not become a priority for the government.

Among those who care about environmental issues, the number of people who consider it as a big problem is much higher - 80%, in comparison of those who view environmental issues as somewhat a problem -18%. Only 2% of citizens neglect the importance of environmental protection. These are the findings of the Omibus survey supported by the Heinrich Boell Foundation, Tbilisi Office, and conducted by the Caucasus Research Resource Center (CRRC-Georgia) in the frames of its regular Omnibus survey.

Food quality is the most urgent environmental issue for the citizens of Georgia. For 69%, the quality of the food they consume on a daily basis is problematic. The second among the list of pressing environmental problems is logging, which affects 55% of the population. As for the depletion of natural resources, this issue takes the third place in the hierarchy:  50% of citizens consider it as problem.

Why and when do a particular environmental issue become a priority for the people? Many of these decisions are influenced by the different factors. For instance, environmental issues have a gender dimension. It turned out that women are more concerned about food quality rather than men. Or age - the younger generation is more worried about domestic waste. Environmental issues are also characterized by geographical features; hence, construction regulations are a much bigger problem for Tbilisi residents than for those living in other cities or rural areas. Tbilisians are also more concerned about air pollution. 68% of the capital's residents are worried about this matter.

The construction of hydropower plants (HPPs) is not dominant in the list of environmental issues the population is worried about. Moreover, according to the study, the HPP construction is considered as one of the least problematic, 38% in total. Just 15% consider it as a big problem.

One explanation of such attitudes toward HPPs could be the period when the survey was done. CRRC-Georgia conducted fieldwork in the fall of 2020. The organization did complete 1,225 cell phone interviews in November 2020. This is the time, when an unprecedentedly large and self-organized environmental movement of Georgia's recent history was still at its nascent stage. The Namakhvani HPP cascade project is planned to be built on the river Rioni, in the village of Namokhvani, Tskaltubo municipality. Participants of the movement who are against the project, spent their first night in Rioni gorge in October 2020, a month before the survey was conducted.

The movement -Save the Rioni Valley, empowered gradually. After several small and big gatherings, Rioni Valley Guardians held their first large-scale rally in Kutaisi on February 28, 2021. After another crowded demonstration in Kutaisi, the protest got coverage not only from local media outlets but nationwide broadcasters. Later, the demonstrations were held in the capital as well. Thus, Georgia's energy independence and the construction of HPPs have become the main focus of the environmental debate. The survey was conducted months before major developments.

While environmental issues are significant to the population, the governments, neither at the national nor at local levels, do not pay sufficient attention to the ecological situation in the country. 57% of the population who participated into the survey think so. According to 55% of the population, taking care of the environment is not important for the local authorities either. The citizens have a better image of the opposition than of the government, still, 45% believe that they also pay minimum attention to environmental issues. It is worth to be mentioned that environmental issues are more important for opposition-minded people or to those who support the opposition parties, rather than for the electorate of the ruling party.

To illustrate the negligence of the government and the general political spectrum one should look at how environmental issues are presented at the election programs of the last decade. For example, a study conducted before the 2012 parliamentary elections states that environmental protection and sustainable development are not yet integrated into the economic and social development visions of most political parties. Analysis of 2020 election programs also confirms that there is no significant progress in this regard until now.

In the last few years, the environmental discussions deserve increasing attention of the authorities and the media. In order to describe how alarming is the ecological catastrophe the world faces, leading editions started to use sharper words. E.g British newspaper "The Guardian" uses the term climate crisis while reporting on climate change issues. Georgia tries to follow international tendencies on environmental discussions, but insufficiently. An analysis of election programs for the 2020 parliamentary elections reveals that the views regarding green politics are still so superficial that it is sometimes difficult to distinguish the environmental visions of parties of different ideological identities.

The feedback on the protest, which started with environmental, social, or legal arguments against the Namakhvani HPP proves the political indifference toward environmental matters. The political spectrum with a tendency to side with protests was particularly modest when talking about the above-mentioned movement. Primarily due to the maintenance of the existing order of economic development, where large investments often clash with the environmental issues.

Instead of steady and visionary green policies, environmental initiatives have always had a populist tinge. The analysis of the election programs has also revealed that political parties find it easier to talk about environmental issues with a broad consensus with no adversaries, such as providing more green public spaces to the citizens. The inspiration for such promises often comes from the local protests. Tbilisi mayoral candidate Davit Narmania's famous initiative to plant a million trees was preceded by a protest over the possible construction of the Budapest Hotel in Vake Park.

Despite the intensification of environmental activism, these movements remain fragmented. The residents try to protect the ecosystem in their communities but fail to bring systemic changes that create broader and steadier guarantees and monitoring mechanisms for the environmental protection.

This survey once again revealed that Georgian population lack information about the environmental issues and anticipated environmental impacts.  The assessment of EU-Georgia Association Implementation confirms that access to environmental-related information and public participation in the decision-making process remains problematic.

For full data obtained through the survey, please scroll the gallery below: 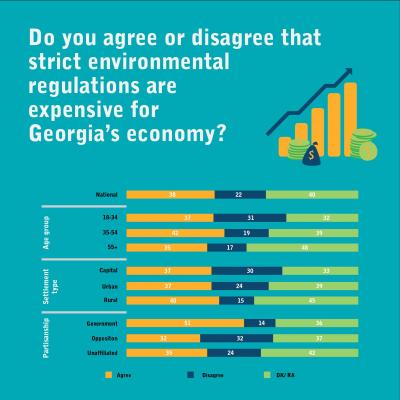 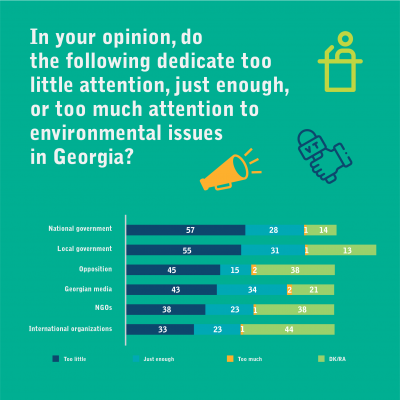 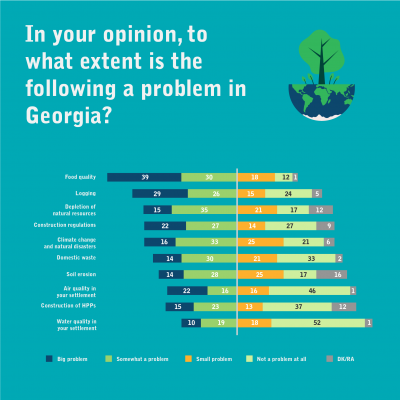 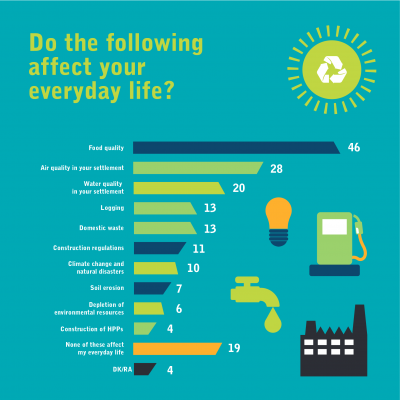 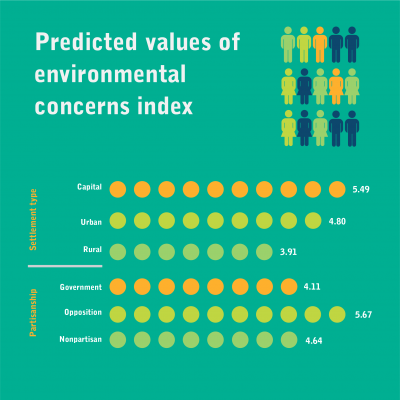 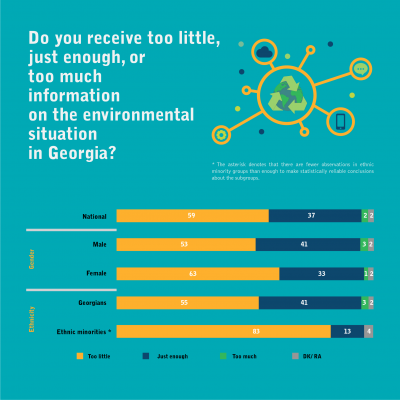 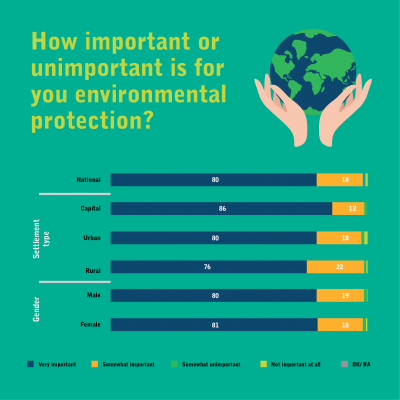