The long shadow of one study: The story of village exchange ten years later

The authors of the article, like many other researchers from the countries of the South Caucasus, were fortunate to participate in the international scholarship program conducted by the regional branch of the Heinrich Böll Foundation in the 2000s. After completion of individual research, the Foundation provided us with an additional opportunity to implement a joint project with colleagues from Armenia. One of the results of this collaboration was the book Beyond the Karabakh Conflict: The Story of Village Exchange written by the authors of this article together with Arsen Hakobyan. Ten years later, the acquired experience has not lost its relevance for us. in Russian

In her book A Long Shadow of the Past, Aleida Assman points to the aspect of the “unfreeness of subsequent generations from the traumatic past and the impossibility of treating it at their discretion”[1]. We observed a similar situation in the former Armenian village of Kerkenj, where the Azerbaijani community of the state farm Kyzyl-Shafag (now Dzunashogh) moved from Armenia after a peaceful collective exchange. After many years, the former Kyzyl-Shafag residents and the Kerkenjans are still painfully remembering their lost homeland and abandoned houses. Thanks to the peaceful exchange of villages, they managed to avoid many of the disasters that accompany the lives of refugees. But the forced relocation and the trauma of the loss of the homeland remains a heavy burden for many. Moreover, their losses are constantly reminded of by the cemeteries which the members of the community agreed to preserve. In exchange, the Azerbaijani cemetery is preserved in Dzunashogh.

The first experience of transnational research

We never thought back in 2007 that it would become an important part of our biographies when the South Caucasus regional branch of the Heinrich Böll Foundation supported our research project aimed at studying the history of the peaceful exchange of villages during the Nagorno-Karabakh conflict.

And, of course, we did not imagine that our research would involve other people in its orbit. The village exchange has become our first joint work with colleagues from Armenia. Arsen Hakobyan, Diana Ter-Stepanian and the authors of the article were citizens of two conflicting states. In this situation, the very willingness to cooperate and work together has become a challenge for us all. After all, the project was not so much scientific as peacebuilding in character.

At first, it seemed that we can easily find a common language and have similar ideas about the purposes and tasks of our research. Later, comparing the first texts, we realized that our interpretations of the collected field materials diverged in many ways. We had to go through lengthy and often very heated discussions, which made it possible to significantly adjust the divergent positions. Looking back, we can say that we would not have coped with this challenge without the support of HBF’s managers and experts such as Walter Kaufman, Nino Lejava, Victor Voronkov and Alexander Iskandaryan. In the final analysis, the book[2] prepared on the basis of the results of the project demanded so much emotional investment from us that we seriously questioned the prospects of further cooperation with our colleagues from Armenia.

Working on projects for peaceful transformation of conflicts

Despite our differences, once the passions subsided we were rewarded with a sense of satisfaction from the work done. We always feel, of course, a deep gratitude to the inhabitants of Kerkenj, who shared with us their touching and sad memories. The first step to working together was the most important one.

It was understood that we can and should work with our colleagues from Armenia if we are striving to contribute to the peaceful transformation of the conflict, and not to invest our energy and skills in deepening it.

We crossed the red line, overcame the internal barrier built under the influence of life in the situation of an endless conflict, and acquired the experience needed in complex transnational peacebuilding projects, including the experience generously shared with us by the leaders of the Heinrich Boell Foundation and our experts. A little unexpected for ourselves, after some time we organically joined new transnational peacebuilding projects. We were fortunate to participate in many initiatives over the past ten years, but it was the first experience of teamwork that became most important.

The effect of the study

We certainly were not so naive as to think that our project and publication are capable of any significant impact on the dynamics of the conflict. We tried to initiate a discussion about aspects that were almost completely replaced by the dominant conflict discourse. Within this discourse, many years of peaceful coexistence of Armenians and Azerbaijanis were displaced from public discussions. Memory politics are built only on the events of confrontation. Over the years of the conflict, a huge body of narratives was created, telling only about hostility and hatred. By our research, we sought to shake the discursive image of the enemy and show that you can negotiate and solve the most difficult problems peacefully even in a conflict situation. We also strived to demonstrate the eventful history of peaceful relations between Azerbaijanis and Armenians and talk about collective practices of conflict resolution.

However, the effect the publication had was rather discouraging at first. After the presentation in Baku, a well-known civil activist and peacebuilder noted with satisfaction that a great and important work had been done. Now the book can be put on the shelf and wait for it to become popular after the conflict is resolved. Interest in the publication in Azerbaijan and Armenia was surprisingly low. At the presentations, we had to listen to not only positive but also very negative comments. The villagers were even called “traitors” once.

On the contrary, outside the conflicting republics and, in particular, in European countries, the article and its publication aroused great interest. One of the first to respond to the story was the famous Moscow magazine Ogonyok[3]. Literally when this article was being prepared, two new publications devoted to the history of the exchange of vthe illages were published. Under the impression of our book, journalists from the South Caucasus multimedia platform Chayhana, Lala Aliyeva and Sitara Ibragimova, prepared a feature on the current state of affairs in Kerkenj[4], once again reminding the general public of the experience of peaceful conflict resolution. Following this publication, BBC’s Russian service was next to draw attention to the story[5]. The story of the villages is being increasingly popularized, including among residents of Azerbaijan and Armenia as they learn about it. For the first time, this story was even heard on a semi-official Azerbaijani news resource, which re-published the article of the BBC journalists, not forgetting however, to accompany the text with the preamble about “criminal acts of the Armenian leadership”[6].

Visualization of the story

One of the first presentations of the project in Berlin inspired a young documentary film maker Ulrich Aschenbrenner to seek funding for the preparation of a documentary. He went with us to the region in 2009  and made the film Kaukasische Rochade about the villagers and the exchange story. The film was shown at many festivals and venues and was awarded various awards.

In October 2017, in the year of the 500th anniversary of the Reformation and the commemoration of Martin Luther in Europe, the Guardini Catholic Trust and the evangelicals St. Matthäus organized the Decalogue film festival, in which Kaukasische Rochade took part. According to the logic of the festival, each nomination was dedicated to one of the 10 commandments. The film screened in Rome and Berlin received the first prize in the nomination of the Ninth Commandment – “Do not covet your neighbor's house”. It was this commandment, according to the organizers of the festival that the story of the village exchange corresponded to. Armed territorial conflict is often accompanied by violation of human rights, including property rights. Refugees and IDPs had to abandon their homes and take with them only what they needed. Kerkenjans and Kyzyl-Shafagi succeeded, thanks to their agreement, not to lose their houses, but to exchange them for others, saving most of their personal property.

Ulrich Aschenbrenner participated in various discussions following the screening of the film. According to him, the story of the exchange of villages is surprising and interesting for the European public. A typical question that is asked after a screening is whether the villagers are happy that they have managed to exchange villages, or is this event perceived as tragic? In Ulrich’s opinion, it is impossible to answer unequivocally. Of course, the situation in which the villagers found themselves almost thirty years ago explains a lot. They managed to get out of a very difficult and almost desperate situation with dignity. But the loss of the motherland and the forced relocation are inevitably comprehended in metaphors of a tragic and irreplaceable loss.

The loss is particularly real to those villagers who were born, socialized and lived a significant part of life in Kyzyl-Shafag. As for the new generations of former Kyzyl Shafagis who never lived in a village that was left in inaccessible Armenia, the past is the stories told by their parents and relatives. But now many residents of the village also own both our book and CDs with the film of Ulrich Aschenbrenner. They have the opportunity to address the history of the community even after the generation of people who conducted the village exchange would pass on.

Furthermore, this story will remain a constant reminder that one can find a way out and negotiate in most difficult situations.

As for us, we sometimes need to remind ourselves that our work, whose main commandment is do no harm can encourage real people to change their destiny. Recently, the journalist Lala Aliyeva, who visited Kerkenj, told us about a young man who lives in the village. Our research and making of the film motivated him to take control of his life. Then he was just a boy, he decided for himself that he wanted to be the same as these strange visitors whose life is completely different from the village one. He wants to travel a lot and speak different languages.

Leaving Kerkenj after shooting the documentary, Ulrich and I decided to gift an Azerbaijani-English dictionary to the always helpful boy. The book would have been his first textbook. Later he entered the Institute of Foreign Languages ​​in Baku, got to do work he dreamed about and traveled a lot. Once, his parents were able to take fate in their own hands. Their son determined his destiny in an absolutely different situation, yet in the same decisive way.

These stories show us that we can and should participate in determining our own destinies, rather than relying solely on the decisions of politicians or hiding behind the notion that nothing is up to us. 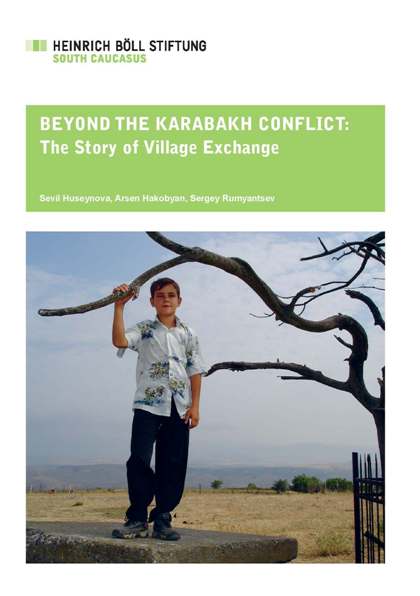 Beyond the Karabakh Conflict: The Story of Village Exchange

In the second half of the 1980s, with the beginning of the Armenian-Azer­baijani military escalation in Nagorno-Karabakh, Azerbaijani residents of Kyzyl-Shafag, a village in northern Armenia, and Armenian residents of Kerkenj, a village in central Azerbaijan, met through their own initiative to negotiate a peaceful exchange of their villages.